AFEA SA has been appointed as the official tour operator for the IFLA 2019 Congress.

You may book your tour before the Congress, by using the following link or during the Congress at the designated Travel Agent counter which will be located within the registration area. 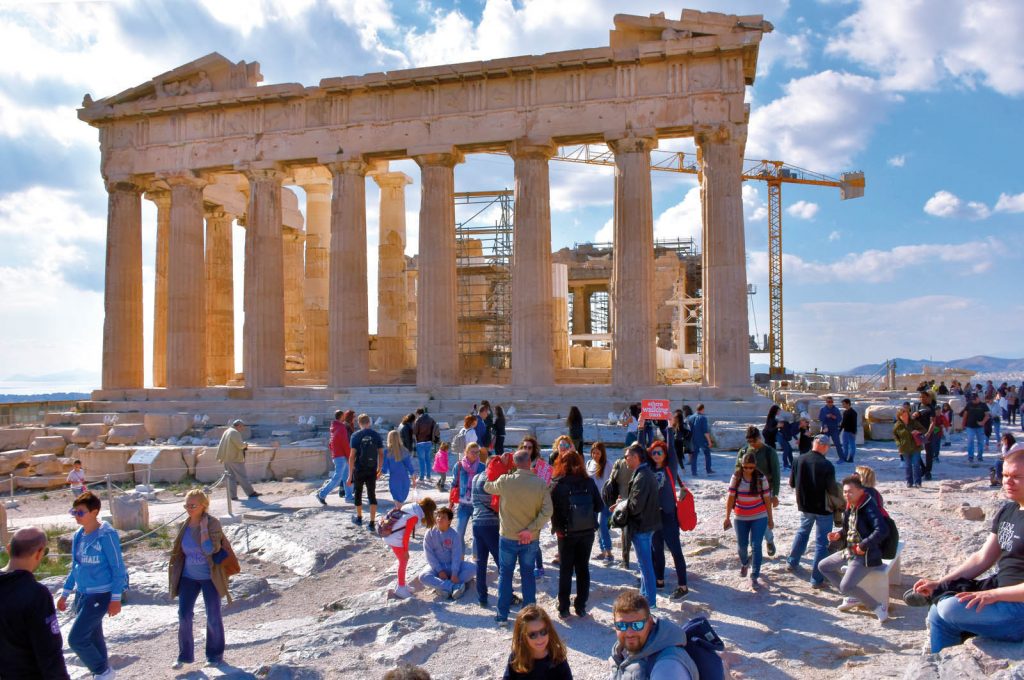 This comprehensive city tour will show you some of the most important landmarks and sights of the historical center of Athens but also a thorough visit to the Acropolis where your guide will give you in-depth guided tour of the history of this world heritage site and its breathtaking monuments.

The tour begins by visiting the Syntagma metro station where the guide will show you shortly the archaeological exhibits that came to light during the construction of the metro. You will then continue on to the House of the Greek parliament, the Monument to the Unknown Soldier and watch the changing of the guards.

Your walking tour of Athens continues towards the National Gardens passing by the neoclassical Zappeion Hall, in front of which tower the surviving columns of the Temple of Zeus and Hadrian’s Arch, both of which you will have to opportunity to visit. Finally, we reach the Acropolis where we will begin our ascent while taking in the spectacular views of the city below. Your guide will give you a detailed explanation of the glorious monuments of the Acropolis such as, the Parthenon, Erection, Propylaia, Nike Temple. 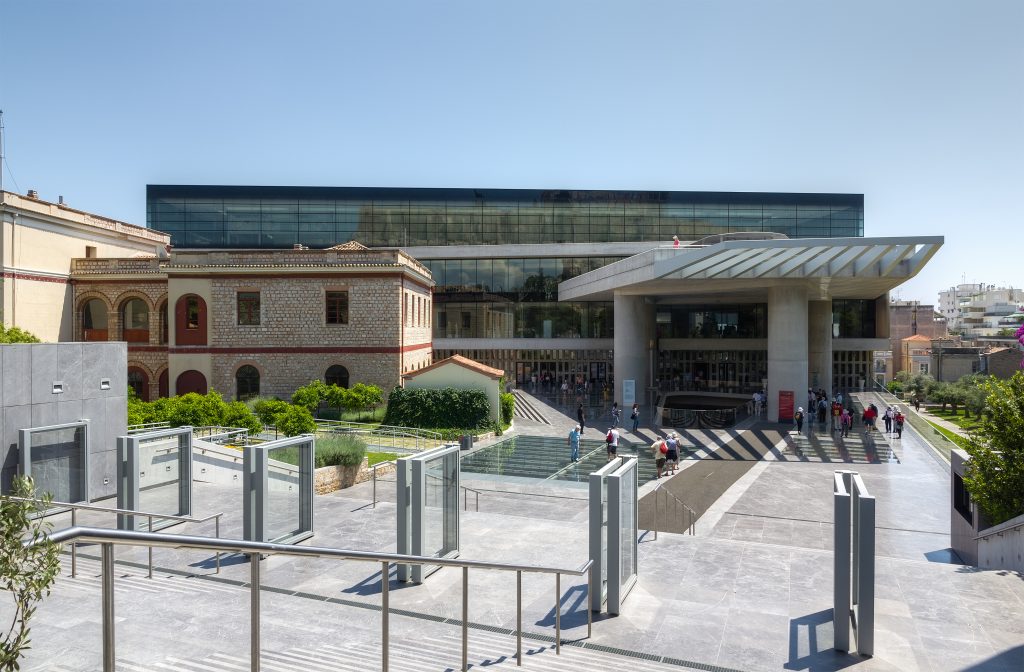 From the Acropolis to Omonia Square, with the half-day sightseeing and Acropolis museum tour you’ll see all the famous sites of ancient and modern Athens on this comprehensive morning tour. Hear insightful commentary from your guide, and pass top Athens attractions including the Tomb of the Unknown Soldier, Greek Parliament building and Presidential Palace Offering a perfect overview of the modern city, this guided half-day tour will help you get your bearings if this is your first visit to Athens.

The Athens half-day tour, depart with a photo stop at Panathinaiko Stadium where the first Olympic Games took place in 1896. It is the only stadium built out of white marble. Proceed, passing by Zappeion and Temple of Olympian Zeus. You will then pass the Athens Trilogy which includes the University of Athens, the Academy of Athens, and the National Library.

Continue passing by National Garden, Hadrian’s Arc, St. Paul’s Church, Parliament, Tomb of the Unknown soldier, Schliemann’s House (Numismatic Museum), Catholic Cathedral, Old Parliament, Constitution Square ,Russian Orthodox Church, and finally ACROPOLIS (visit Propylae the gateway, Temple of Athena Nike, Parthenon, Erechtheion with its Porch of Maidens). Stroll up to the UNESCO-listed site that served as the ancient citadel, and tour the buildings as you hear how they reflected Athens’ prosperity in the 5th century BC.

Continue the expert guided Athens sightseeing and museum tour with a pleasant short walk passing by Herodion and Dionysos Theater, in order to visit the ACROPOLIS museum. Avoid and skip the lines of the new museum. Main attractions such as votives, artifacts of every day life, statues from archaic period, Caryatids, and of course the Parthenon hall with the metopes, the pediments and the frieze will impress you. 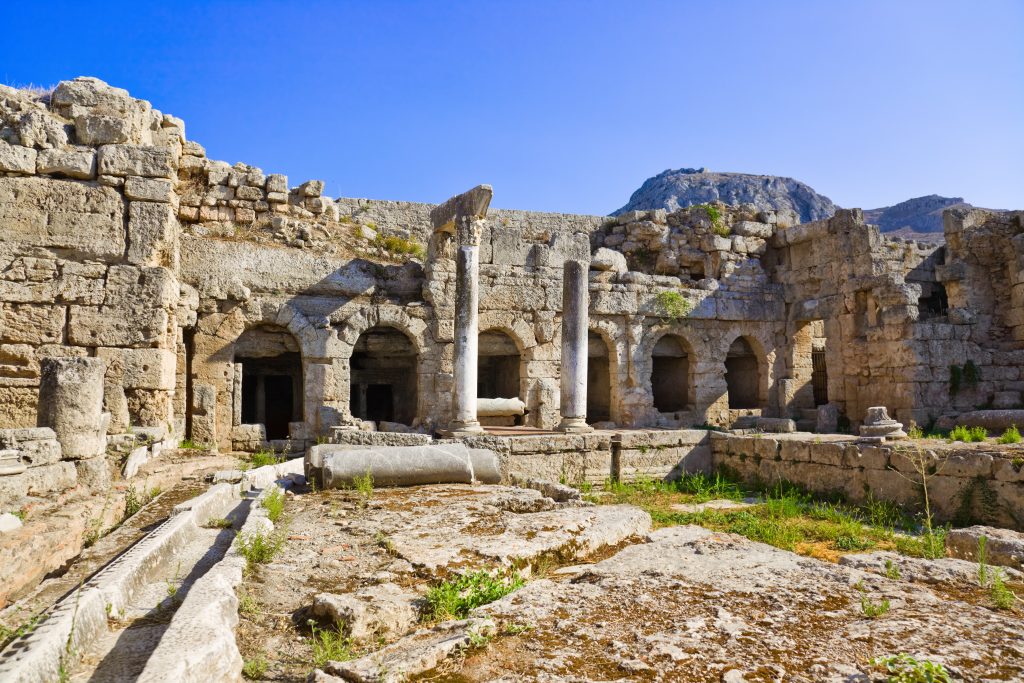 If you are interested in religious tours, this tour is the perfect choice for you. You will have the opportunity to discover two must-see sights on this memorable half day trip from Athens. Enjoy also a photo stop at Corinth Canal before visiting the Ancient Corinth & Daphni’s Monastery with its 11th-century Byzantine mosaics.

Our tour will begin with a scenic drive to Corinth via Iera Odos (the Sacred Way). It was so called because it was the route taken by a procession celebrating the Eleusinian Mysteries, were initiations held every year for the cult of Demeter and Persephone based at Eleusis in ancient Greece.

Along the way, we will stop at the Monastery of Daphni, a 11th-century Byzantine monastery listed as a World Heritage site together with Monasteries Hosios Loukas and Nea Moni of Chios. The interior of the church is decorated with superb mosaics, a unique, fine example of the Classical idealism of Middle Byzantine art. The crowded scenes of the mosaics narrate scenes from the life of Christ and the Virgin.

We will continue our drive along the coastal road and reach the Corinth canal, which merges the Aegean with the Ionian Sea (short stop for photos of the breathtaking view). Shortly thereafter, reach the ancient town of Corinth, where St. Paul lived and preached for two years (Acts 18:1-18). Visit the ruins of the ancient city where Paul worked with Aquila and Priscilla, see the remains of the first century shops, the Agora where Paul’s trial by Gallio took place, the Fountain of Peirene, and one of the most outstanding monuments of pre –Roman period, the temple of Apollo. 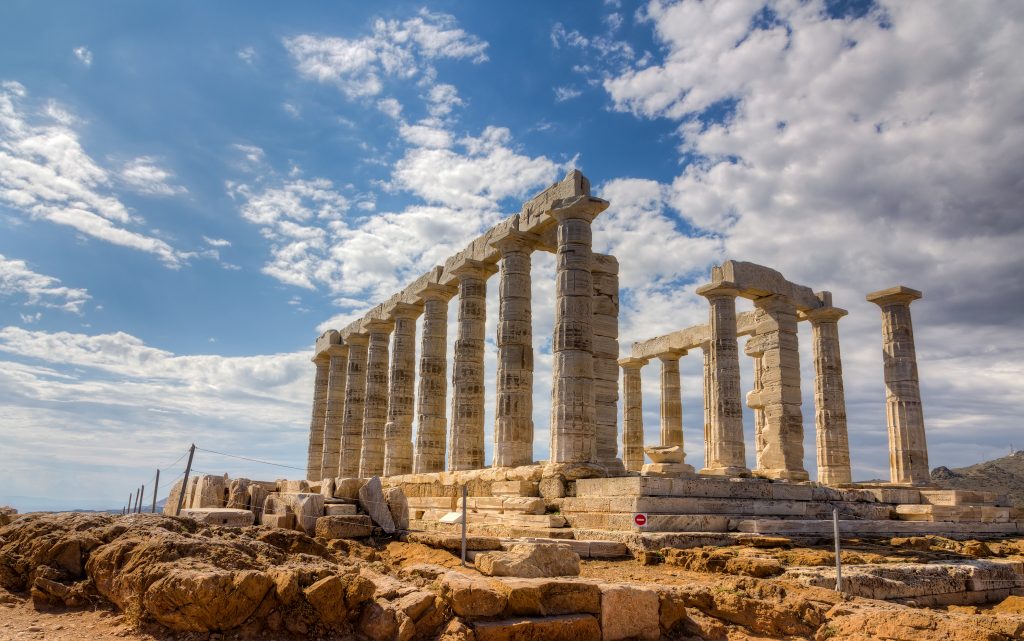 A half day afternoon trip from Athens full of images and breathtaking views. Begin your Sounion tour with a wonderful drive along the scenic coastal road which affords a splendid view of the Saronic Gulf, passing through some of Athens most beautiful suburbs (Glyfada,Vouliagmeni, Varkiza) and idyllic beaches. As you approach Cape Sounion, one of Greece’s most photographed monuments, it rises like a sheer cliff out of the sea. At Cape Sounion you will visit the 5th century B.C. Temple of Poseidon with one of the most breathtaking panoramic views in the world (on a clear day you can see at least seven islands). The precipice is a sheer 197-foot drop to the sea.

Land masses to the west stand out in sharp profile: the island of Aegina backed by the mountains of the Peloponnese. The beauty of the surviving Doric columns has inspired many poets, including Lord Byron who carved his name on one of the columns. This half day excursion is a great option if you want to discover Greece beyond Athens, enjoy stunning views and visit world famous Greek ruins. 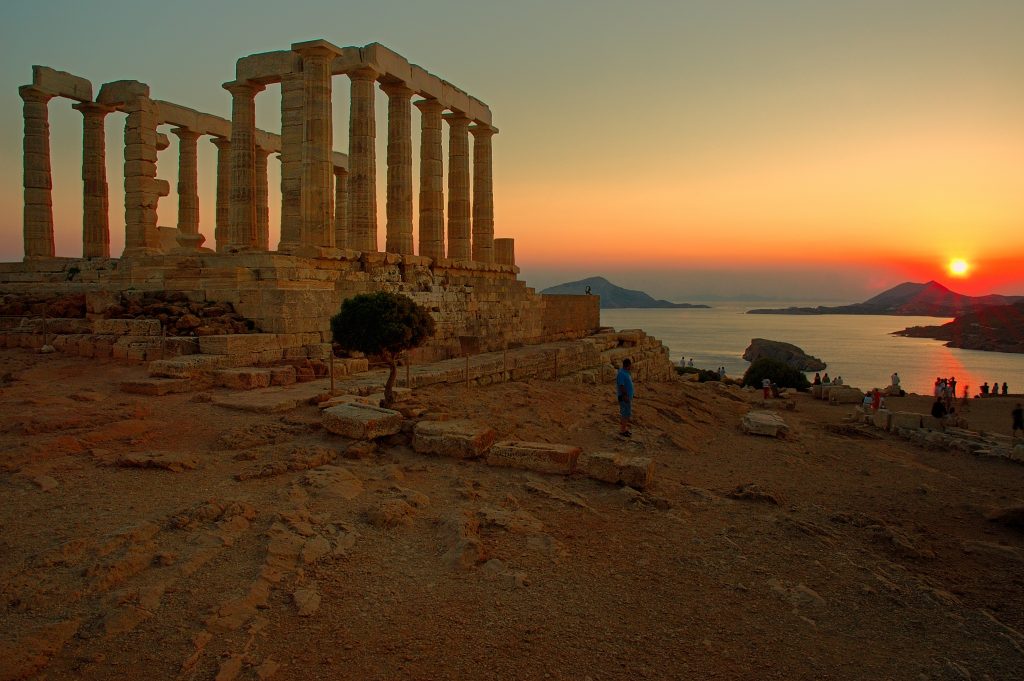 Join our guided half day tour to Cape Sounion and experience a breathtaking sunset at the unique temple of Poseidon, the God of the Seas in ancient times.

Our tour starts with a wonderful drive along the Athens Rivera. During this relaxing ride with your luxury air-conditioned bus you’ll enjoy splendid views of the Saronic Gulf while passing through some of Athens’ most beautiful suburbs, including Hellinikon Olympic complex, Glyfada, Vouliagmeni, and Varkiza.

Arriving at the Cape Sounion, you will visit the 5th century B.C. Temple of Poseidon with its magnificent panoramic view of the Aegean Sea (on a clear day you can see at least seven islands). One of its columns has a graffiti left by none other than lord Byron in the early 1800s. Cape Sounion has long played an important part in Greek mythology and history, and the first recorded mention of it occurs in the Odyssey, as the last safe landing before Poseidon scattered the returning Greek navy. As god of the sea, Poseidon was very important for ancient Greeks, and the scale of the Temple at Cape Sounion reflects that.

After visiting the Temple, filled from the beauty, the history and the culture of this site we will wait to admire one of the most amazing sunsets you could ever imagine. 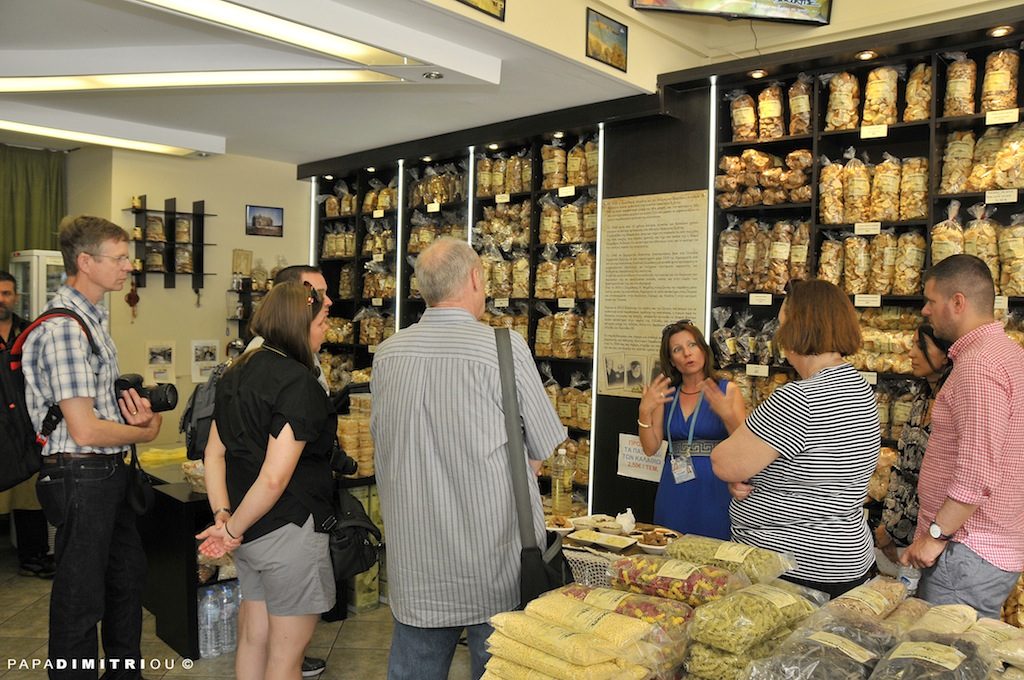 Each food walking tour includes mouthwatering food tastings from the various specialty and food shops that we will pass along the way on a different “off-the-beaten-path” gastronomical route around central Athens. A tour you surely do not want to miss while you are in Athens.

Join us to embark on a gastronomical journey through some of the original and historical neighborhoods of Athens. Our tour will begin at the Korai street. An array of colors sights and sounds engulf the visitor and, at once, activate the senses.

Along the way you will see fruit and spice stalls, colorful and enticing delicatessens, aromatic and tempting bakeries and sweet shops and of course the famous food market of Athens. We will expertly guide and explain things to you en route and provide valuable insight not only about the unique and intricate culinary heritage of the Greeks but also of the cuisine we have all come to know as Mediterranean.

Prices shown are in Euro per person. All tours operate on a sharing basis. All tours are conducted in English.

Full prepayment is required for the confirmation of your booking.

In case of an outstanding payment, the confirmation of your selected services will be resent upon finalization of your payment. If you proceed with a wire transfer, you are kindly requested to send a copy of the bank transaction receipt at wlic2019-tours@afea.gr.

o Cancellations received up and including August 17th, 2019 – full refund

Cancellation of tours must be made in writing to the AFEA SA at wlic2019-tours@afea.gr before August 18th, 2019. An administrative fee of 30 euros will be deducted from all refunds. No fees will be refunded after this date.

Kindly note, that all refunds will be processed one month after the Congress.